Living through eight decades provides one with a panorama of memories, each touching my heart. I was born in 1929, at the beginning of the Great Depression. The thirties and forties were decades that still mark turning points in the history of our nation and its people. Those years were full of pain and sadness for many families, including my own, but I emerged from them an optimistic, independent and secure young adult. The following story had a great deal to do with that outcome. 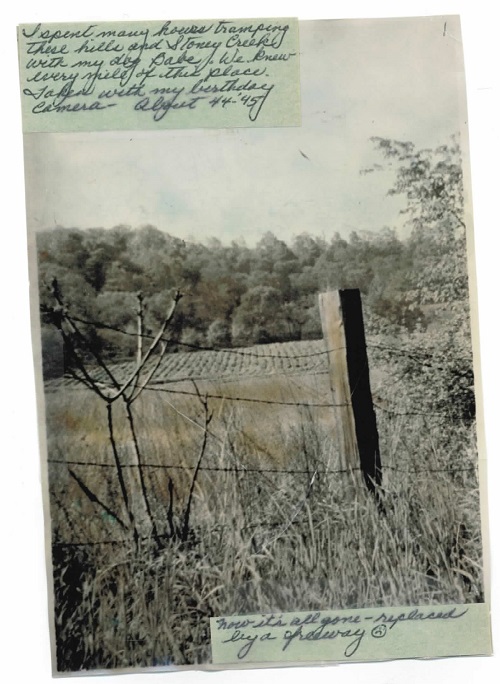 Cleveland, Ohio to a farming community west of the city.  Our home was one of many built on an impressive ridge that ran for many miles. The houses across the street were also built on this ridge. Behind the houses on my street and across the street, the ridge dropped off dramatically, exposing an immense valley. That valley was a crazy quilt of small truck farms providing goods for the city market and extended to Cleveland, which could be seen on a clear day. The valley behind my home had a few farmers planting on the lower level ground, but most of it was wild with trees and steep ridges and creeks waiting to be explored. It was about 20 to 30 miles long, and I assume it was created by glacier action. The road from the valley to the main highway was in bad shape most of the time, as it wasn’t used unless the farmers needed to haul in equipment or ship out produce. But, it was close to my house and it was a convenient way to get to the wonders that lured from below.

I was about 12 or 13 when I would pack a lunch, call my dog Babe and head off for the day. We had to slowly maneuver over the crooked stone steps in the rock garden behind my house and continue on past Mr. Goodrich’s red barn until we came to the edge of the steep hill that led to the valley below. There was a big rock there and if you stood on it you had a panoramic view of the whole valley. If you looked straight ahead you could see cars going by on the road on the other side of the ridge about 10 miles away. I can recall every landmark on my journey down that road as if it were yesterday. The road continued fairly straight past the black walnut tree on the left and then curved sharply to the right, as the scent of a beautiful huge old apple tree just beginning to lose its blossoms perfumed the air. Babe had taken off down the road while I wasat the top of the hill, but she came charging out of the brush covered with prickers and old weeds, to check on me. I gave her a pat and we continued past the apple tree and down the road heading for the bottom of the valley. The first part of my walk was usually the coolest, but the heat built up on the bottom lands and once you passed the shade of the apple tree and turned down further toward the bottom land, it hit you full force, especially if it was a hot day. Babe was still dashing off at every step as I hurried to the bottom of the hill, anxious to get to the coolness surrounding a rough wooden bridge that covered a small tributary.  Babe greeted me again and we continued.  I was glad I had worn solid shoes, for the road and bridge were much rougher than l remembered. The air rose, fragrant from each side of the path now growing narrower as we passed the last clump of brush before the path opened to reveal a murky green creek active with minnows and crawfish. The water was cool and swift and I took my shoes off and did what feet love to feel and do. 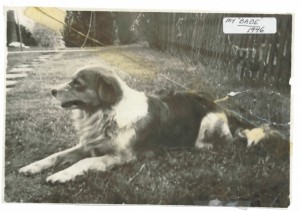 The creek bottom was covered with large slabs of smooth grey, dark blue and deep red slate. It was fun to walk on, but was very slippery, as it was covered with dark brownish scum. It was probably polluted, as there were many factories to the east of the ridge. Babe was happily splashing through it and drinking it as she always did. I scooted along raising little rivulets of murky scum that oozed between my toes. Crawfish curled their tails behind themselves and scooted backward with lightening speed as I explored upstream. To my right was Clay Mountain, a giant hill of crushed clay that 1 think was a natural feature. When with friends exploring, we would climb up the backside of that hill around trees and bushes until we reached the top and then slide down extremely fast on our bottoms into the creek, which was very wide and shallow at that point. I only did that when friends were with me.

I now turned west to explore one of my favorite spots on Stony Creek. Babe came running up to shake off more water and followed me downstream to the giant piece of slate that jutted out from the edge of the hill above the creek. The creek turned sharply left there, and because of the current a lot of the sediment had been pushed downstream, enabling a nice swimming hole to develop. The water was clear and cool in that spot and about six foot deep. Babe and I didn’t have a discussion, we just plunged in. The slate shelf above the pond created a nice sunny spot to dry off and warm up.

Babe shook off and then climbed up beside me on the shelf and rested. She smelled wet and doggy, 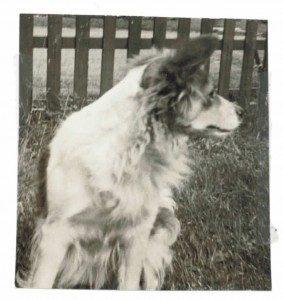 but I’ve never smelled a scent better. I hugged her close. The peaceful sights, sounds and smells from that special place are burned into my memory forever. It was just me and my dog alone on that special shelf, with time to think, dream and explore possibilities that have built the person I’ve become.

The views from that stone at the top of the hill remain with me today. The whole beautiful world, my Shangri-La, was spread out before me, ready to explore and experience in every way, through sight, sound, touch and smell. When it was nearing suppertime, or my Mother was getting worried, she would stand on that rock on the top of the hill and call “REEDA, REEDA”, her voice would ring out clear and firm echoing through the entire valley. I would answer “Coming Mom.” Then I would call Babe and begin the long climb up the hill.