The world we live in is constantly changing, but one thing remains the same: our love for the land. Built on a five-decades-long foundation of strong land protection, dedicated staff, board, supporters, donors, volunteers, and partners, Legacy has the experience and ability to withstand and adapt to the dynamic world in which we live. Together we successfully navigated through the first fifty years. And, together we will continue the journey to ensure that the next fifty will be just as successful!

Check out our Points of Pride and take a stroll down memory lane by reviewing our history below.

To view a video of Legacy’s First 50 Years, click here.

We’ve accomplished a lot in 50 years! Here are just a few of the things we’re most proud of:

• Protected nearly 10,000 acres of land in the greater Washtenaw and Jackson areas with the support of individual donors, foundations and volunteers, and the partnership of local, state, and federal agencies.
• Worked with 71 landowners to protect over 3,900 acres of private land through conservation easements.
• Protected over 300 acres as public nature preserves that include over 9.5 miles of trails.
• Completed 48 projects with partners resulting in 5,288 acres protected. Legacy was founded on and helped to create a partnership of preservation alongside other conservation organizations like Washtenaw County Parks and Recreation, the Ann Arbor Greenbelt Program, Huron River Watershed Council, and Ducks Unlimited.
• Protected 2,416 acres of farmland, 43 acres of open water, 1,370 acres of wetland, 1,500 acres of woods, and 119,459 feet (or 22 miles) of water frontage as a result of the protection of private land through conservation easements and preserve ownership.
• Monitors over 100 conservation easements and manages 7 public preserves.
• Worked with over 742 volunteers and recorded more than 34,558 volunteer hours.
• Became one of the first accredited land trusts in the nation in 2009. In 2014, and again in 2020, Legacy was re-accredited by the Land Trust Accreditation Commission.
• Legacy preserves provide places of solitude and refuge for our community to safely engage with the natural world – a benefit that has become increasingly important during the COVID-19 pandemic.

And, we’re not done. The next phase of our work will strive to mitigate the effects of climate change and will embrace a commitment to justice, equity, diversity, and inclusion, as we protect, preserve, and steward land for all people.

The early days of land conservation

In the depths of the Great Depression, a group of visionaries (urban planners, public officials, business leaders, and others) had an idea: protect a swath of natural land throughout the Huron River and Clinton River watersheds that would be accessible to the rapidly growing population of southern Michigan. 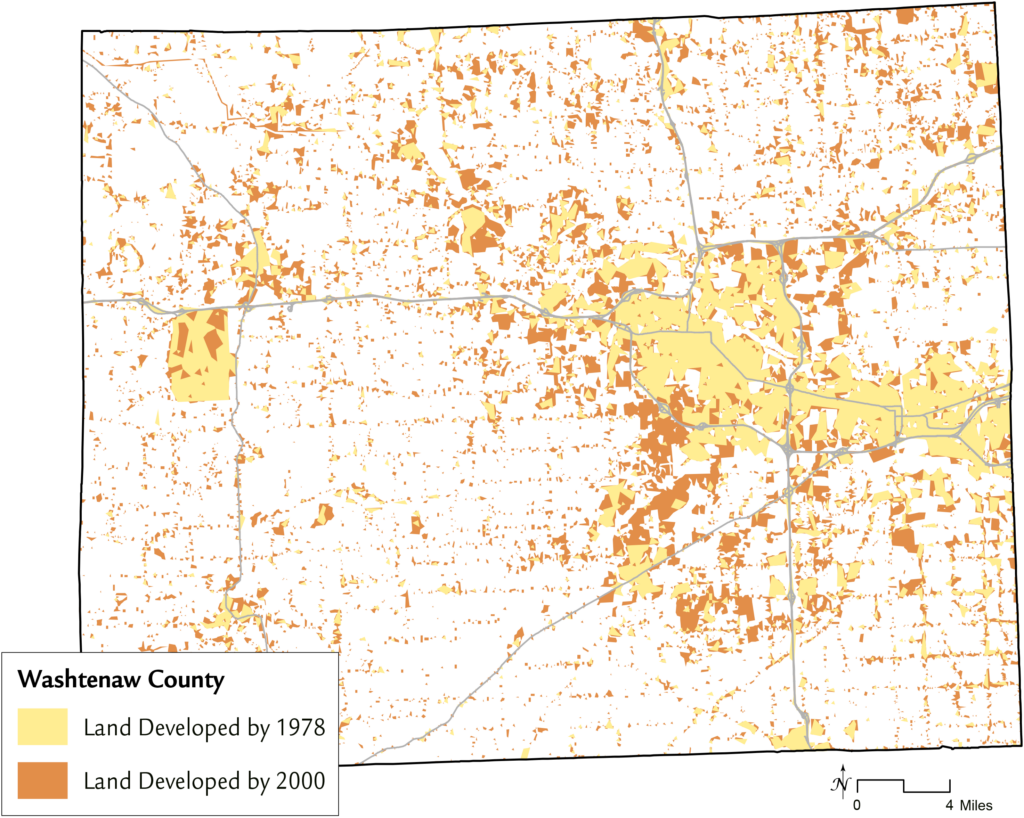 It was an impressive idea left up to the government to carry out. During the mid-20th century, the main method of protecting land by the creation of public parks—such as the Huron-Clinton Metroparks and state land in Waterloo and Pinckney Recreation Areas, through outright ownership and primarily through the efforts of government agencies—was only a partial solution. Over time, development pressures intensified in southeast Michigan. The need arose for conservation methods that could respond in ways that governmental entities could not. Local citizens stepped up to protect the land they loved. Across the nation, land trusts and conservancies were created to focus on addressing community conservation needs.

A new niche: purchase and transfer 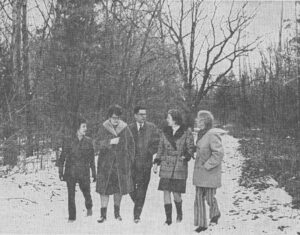 In 1971—at the forefront of this movement—a group of Ann Arbor community leaders were concerned about the potential development of what is now the Bird Hills Nature Area, important land adjacent to the Huron River. On May 10, 1971, they officially banded together to form Washtenaw Land Conservancy (WLC), the state’s first nonprofit organization dedicated to the voluntary protection of local landscape. WLC successfully acquired the parcels through a combination of gifts and donations, and fee simple acquisition, keeping Bird Hills in public trust with the City of Ann Arbor.

WLC’s hardworking, all-volunteer leaders learned quickly and set out to protect natural lands along the Huron River. One project at a time they carved out a new niche in land conservation: protecting important parcels by purchasing and transferring it to public agencies. WLC’s first project was protection of a Huron River frontage property in Scio Township downstream of Delhi Metropark. In cooperation with the Michigan chapter of The Nature Conservancy (TNC) and the Washtenaw Audubon Society, the land was acquired and became the Osborne Mill Riverlands Preserve. In 1980, the Osborne Mill property was deeded to the Washtenaw County Parks and Recreation Commission, which owns and manages it today. Subsequently, lands for Bandemer Park (1984), an addition to Bird Hills Park (1990), and Black Pond Woods Park (1991) were assembled and transferred to the City of Ann Arbor Parks Department.

In 1989, a second land conservancy was incorporated in Washtenaw County. The Potawatomi Land Trust (PLT, originally named Potawatomi Community Land Trust) formed with a primary goal of finding a permanent home for the Community Farm of Ann Arbor (CFAA). During the fifteen years the CFAA project took to complete, PLT joined the first wave of land trusts using donated conservation easements to protect natural and agricultural lands. In 1995, with its first executive director Barry Lonik, PLT closed on its first donated conservation easement in Lyndon Township. (Little did we know the donated conservation easement would become one of our most well-known and most widely used land protection tools in Legacy’s history!) Later that year, PLT acquired its first nature preserve: Creekshead Nature Preserve in Salem Township, followed in 1999 by Beckwith Preserve in Stockbridge.

In 1998, PLT was also a leader in efforts to establish a Washtenaw County-wide millage to fund the purchase of development rights. Although this effort was initially unsuccessful, it raised awareness about the issue and opened doors for future land protection options.

In 1999, WLC and PLT merged to form the Washtenaw-Potawatomi Land Trust (WPLT), which then changed its name to Washtenaw Land Trust (WLT) in 2001. The executive director of PLT, Barry Lonik, assumed the leadership position with WLT. The collaboration between these two similar missions led to new success, and it was then that the organization began to pursue farmland preservation projects in earnest. Thanks to the millage efforts of PLT two years prior, a new conservation strategy – preserving land through purchase of development rights (PDR) – helped drive farmland protection in Washtenaw County.

Many landowners were assisted with applications to the State of Michigan Purchase of Development Rights (PDR) program, and three were approved for funding; representing three townships (Scio, Lima, and York) and over 700 acres.

WLT took farmland preservation efforts one step further with the direct purchase of development rights on an Ann Arbor Township centennial farm in 2001. It was the first such project completed by a land trust in Michigan and included a major contribution from the township. Two years later WLT received a grant from the Federal Farm and Ranch Lands Protection Program to purchase a conservation easement on a farm in Freedom Township. Then in 2004, WLT, after persevering through a fifteen-year-long effort, successfully closed on a purchased conservation easement on land used by the Community Farm of Ann Arbor, now settled in Lima Township. All of these projects provided examples and leadership that helped set the stage for the successful millage-funded PDR programs in our area today.

During this time, WLT also increased its scope to include the land in and around the Waterloo Recreation Area. In 2003, WLT officially incorporated the Waterloo Land Conservancy Trust through an agreement that combined the resources of the Trust into a designated WLT fund.

In 2008, the Board took steps to formally extend its service area to include Jackson County. This action was in response to increased landowner interest, and recognition that Jackson County possesses some of the world’s rarest landscapes, worthy of a concentrated land protection effort. Furthermore, none of the natural systems protected by the Conservancy respect geo-political boundaries. In addition, because of an increase in available funding through local and county millages, government entities in the Washtenaw County area now had the ability to purchase more land on their own. This allowed Legacy to morph into a supporting role in Washtenaw County and expand our work into Jackson County. The organization acted to reflect this new reality by changing its name to Legacy Land Conservancy in 2009.

The world we live in is constantly changing and land protection has become more complicated. But, one thing remains the same: Legacy’s love for the land. Built on a five-decades-long foundation of strong land protection, dedicated staff, board, supporters, donors, volunteers, and partners, Legacy has the experience and ability to withstand and adapt to the dynamic world in which we live.

While the original vision was a series of connected parks to provide recreation, over the years it expanded to include protection of both public and private lands, for a wider range of benefits: water quality, habitat corridors, agricultural production, and trails connecting larger blocks of recreational land. And, we’re not done. The next phase of our work strives to mitigate the effects of climate change and will embrace a commitment to justice, equity, diversity, and inclusion as we protect, preserve, and steward land for all people, and create a superior quality of place for our communities.