In the following blog post, veteran birder Allen Chartier shares his recent experience capturing the oldest Ruby-Throated Hummingbird on record.  Chartier is co-editor of the American Birding Association’s “Birder’s Guide to Michigan” and has been a contributing author for various birding projects for National Geographic.

On Thursday, July 17, I recaptured a Ruby-throated Hummingbird at a home near Waterloo, Jackson County, that I had banded there on June 8, 2006. She was an adult when banded, so was hatched in summer 2005 or earlier, making her at least 9 years 1 month old (using the Bird Banding Lab’s standard method of calculating bird ages). According to the Bird Banding Lab’s longevity database, this is the oldest Ruby-throat ever confirmed. She has been recaptured a half-dozen times over the years since she was banded, including last year when she was at least 8 years old, and always at this same home. I’ve calculated that she’s traveled at least 36,000 miles in her migrations during her lifetime, or possibly as much as 49,000 miles, depending on where she spends the winter. She has probably produced between 18 and 36 young in the past 9 years, so with an 80% mortality rate of hatch-year birds, 4-8 of those have likely lived to be adults. The “average” life span that I see on these birds is about 4 years.On Saturday, July 19, I recaptured another female Ruby-throat that was banded as an adult 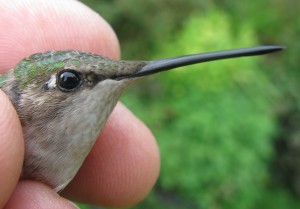 in 2007, making her at least 8 years 1 month old. So far this summer I have banded 300+ Ruby-throats mainly in southeastern Michigan, plus have recaptured an additional 100+ returning from previous years, which is more than average.

[Note: The 8 year old bird was found on a Legacy Trustee’s property!]