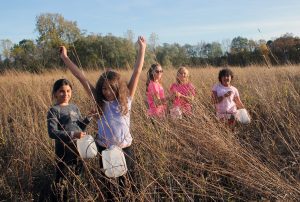 Sporting belts of milk jugs, the girls ran through the property’s tall native prairie collecting Indian grass and switchgrass seeds. Adults collected other native plants including wild bee balm, foxglove beard-tongue, yellow coneflower, and blue vervain. Land Steward Allene Smith also treated the troop to a talk on the parts of a flower and medicinal plants as part of earning their “flower” badge.

“I was expecting it to be really boring, but it was the opposite. It was great,” said Veronica, 11.

Legacy routinely collects native seeds for planting in restoration areas on our preserves. The troop dispersed some of the seeds in a section of prairie onsite that was damaged during a drain field replacement. 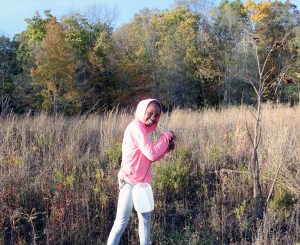 “I am helping so much, I think these plants will remember us,” said Diamond, 10.

The rest of the seeds will go to Lloyd and Mabel Johnson Preserve, where the stewardship team has been planting a large prairie. For smaller restoration projects seeds are collected and sown at the same site, moving seeds from an area of abundance to an area of scarcity on the same property. The Johnson prairie planting is on a much larger scale, and collecting seeds from different sites will add to the species diversity and richness.

The troop collected 10 milk jugs of native seeds, five of which will be sown on the Johnson preserve on October 26.