Even with a few warm days ahead, the autumn has begun in earnest. This transition always provides a prompt to reflect on the recent growing season and all the stewardship work on our Preserves that we’ve been able to accomplish. 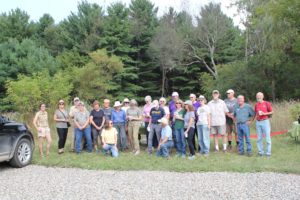 The new parking area for our Beckwith Preserve saw a lot of traffic during its first summer! We hosted a ribbon-cutting in September to thank the donors and volunteers who helped to make the project possible. A signage update is underway to go with our new trailhead, which will be made possible with funds from the 5 Healthy Towns Foundation. 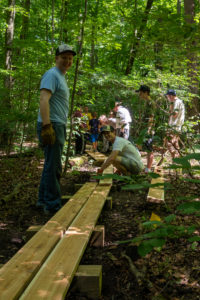 With the help of Eagle Scout candidate Nick de Schweinitz, 60 feet of raised plank boardwalk was added to the preserve’s trail system. This addition constitutes the last section of a larger boardwalk expansion project, which was begun years ago by Preserve Adopters Pete and Anita Sandretto. In total, the project has added roughly 200 feet of boardwalk to the preserve’s trails. The Creekshead Preserve is home to vernal pools and the headwaters of two creeks, so certain areas of trail remain wet year round. 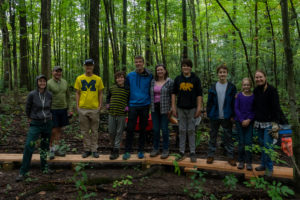 With the help of a second Eagle Scout candidate, Kellen Blackwell, 70 feet of raised plank boardwalk was added to the loop trail around the Johnson Preserve’s buttonbush swamp. This particular section of trail had widened in recent years as springtime visitors attempted to avoid the wet and muddy trail center. Both scouts we worked with this summer were able to fundraise for half of their project costs, which means we were able to add twice as much boardwalk as planned this year! 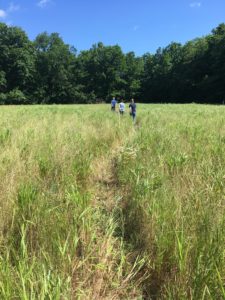 A group of staff from the University of Michigan’s College of Literature, Science, and the Arts worked with Legacy’s stewardship staff to establish a new trail that traverses the prairie and opened a new entrance into the preserve’s woodland. The prairie restoration, which was initiated in the spring of 2017, has taken root and with this new trail visitors will be able to see the native forbs and grasses up close. 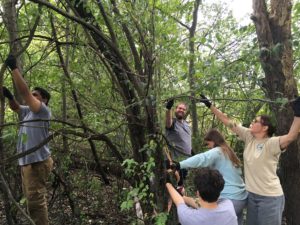 2019 marks the third year of Legacy’s wonderful relationship with the Eastern Michigan University Biology Department, which helps to bring groups of students from the university to the Preserve. This year we welcomed 20 students and their professors who helped to remove mature invasive shrubs from the fence rows dividing the prairie. This work is part of an ongoing project to prevent invasion of the prairie by invasive shrubs. To date, EMU students have helped to remove over 2/3rds of an acre of mature and densely grown common buckthorn (Rhamnus cathartica) and honeysuckle (Lonicera sp.) from the site.

This was our first summer working with new Reichert Nature Preserve caretakers Cayla Tinney and Shawn Zellers, who have truly taken the preserve under their wing. They have helped to move important projects up on our list of priorities, such as asiatic bittersweet (Celastrus orbiculatus) control, increased management of invasive shrubs throughout the preserve, and the initiation of monitoring and strategic management within the high-quality tamarack swamp which encompasses over half of the property.

Legacy volunteers Bill and Deborah Strohaver, Jim Rossman, and Charity Steere responded promptly to the sudden spread of Japanese hedge parsley in a high-quality area of the preserve, removing plants and their seeds from over a half acre in only two short visits. A rapid response like this is just what the situation called for!

Legacy volunteers Bill Strohaver and Jim Rossman established a system of upland trails at the yet-to-be-unveiled Anthony and Rose Shatter Family Preserve. Legacy has partnered with the Salem Township Land Preservation and Conservation Board to install a parking area for the preserve, planning for which is underway.

One thing that is clear in recapping the successes of the season is that we absolutely could not have made the progress we did without the help of volunteers, whether they gave an hour, a month, or have been helping to move forward conservation efforts for years or a lifetime.

Perhaps especially in our work with youth and college students, most of whom are in their early to mid-twenties, I am aware that the volunteering experiences Legacy has to offer can be hugely impactful. Providing young people with positive experiences working outdoors builds the groundwork for the next generation of conservationists, planting seeds that will hopefully grow into a full-fledged conservation ethic. Young volunteers learn, directly or indirectly, about project planning, leadership, teamwork, respect for our natural resources, and endurance along with practical skills like tool usage, plant identification, and the physics of how to fell a small tree. They can learn the values and joys of physical work and time outdoors, which for me resulted in a career in conservation!

It was a busy summer, and the fall has its own work in store! Autumn is a great time to cut invasive shrubs, and we have a few. If you’d like to be a part of Legacy’s successes, contact stewardship@legacylandconservancy.org.