One thing that unites us as a nation is land: Americans strongly support saving the open spaces they love. Since 1971, Legacy Land Conservancy, has been doing just that for the people of Washtenaw and Jackson counties. Now Legacy Land Conservancy announced it has renewed its land trust accreditation for the second time– proving once again that, as part of a network of over 400 accredited land trusts across the nation, it is committed to professional excellence and to maintaining the public’s trust in its conservation work. 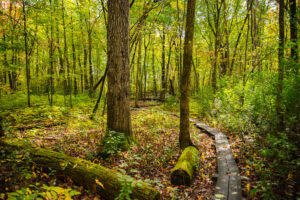 Larry Doll, Legacy board president says, “Our Board of Trustees is committed to meeting the highest standards for land conservation. Accreditation by the Land Trust Accreditation Commission demonstrates that commitment, assuring land owners, donors, partners and the entire community that Legacy is a strong and effective organization.”

As Legacy Land Conservancy embarks on its 50th year of protecting, preserving, and stewarding land, it has protected more than 9,000 acres of land in southern Michigan, including seven public nature preserves. This renewed accreditation is a testament to the dedication of its staff and board, and assures the right pieces are in place to guarantee its work will endure forever.

“It is exciting to recognize Legacy Land Conservancy’s continued commitment to national standards by renewing this national mark of distinction,” said Melissa Kalvestrand, executive director of the Commission. “Donors and partners can trust the more than 400 accredited land trusts across the country are united behind strong standards and have demonstrated sound finances, ethical conduct, responsible governance, and lasting stewardship.”

Legacy Land Conservancy is one of 1,363 land trusts across the United States according to the Land Trust Alliance’s most recent National Land Trust Census. A complete list of accredited land trusts and more information about the process and benefits can be found at www.landtrustaccreditation.org.

About the Land Trust Accreditation Commission

The Land Trust Accreditation Commission inspires excellence, promotes public trust and ensures permanence in the conservation of open lands by recognizing organizations that meet rigorous quality standards and strive for continuous improvement. The Commission, established in 2006 as an independent program of the Land Trust Alliance, is governed by a volunteer board of diverse land conservation and nonprofit management experts. For more, visit www.landtrustaccreditation.org.