Legacy Land Conservancy’s newest preserve, the Reichert Nature Preserve, is uniquely situated on a small finger -shaped moraine surrounded by wetlands on both sides which, in addition to the Reichert family’s efforts ,has prevented its development.  With approximately 70% of the 92 acres of land either wetland or pond, hiking trails are limited, but rare plants are abundant! On June 22nd ,MBC and other Legacy members explored the preserve with Bev Walters as enthusiastic guide.

Participants met in the caretaker’s adjacent backyard resembling an oak savanna with towering widely spaced oaks. Kept clear with infrequent but regular mowing, the area had a few interesting plants to offer.  Around downed logs we found some wild lettuce and some other good starter plants. Going into the body of the preserve following a boardwalk through the northern end of the Southern Shrub Carr wetland there were many opportunities to learn Toxicodendron vernix (poison sumac),  plenty of Symplocarpus foetidus  (s

kunk cabbage) for olfactory enjoyment, some Cypripedium parviflorum (yellow) and one Cypripedium acaule (pink ladies slipper). Walking further into the preserve and out
onto the moraine, Bev communicated her excitement about the high quality of this Dry Mesic Southern Forest  and the disjunct and rare species found here.  Our find of Lathyrus ochroleucus (cream pea), a delicate little vining plant in the pea family with creamy white flowers,  is the only known population in Washtenaw County. With a Coefficient of Conservatism at 8 (out of 10), this is generally a difficult to find plant. Further down the trail a lively discussion ensued near the end of the moraine under the shade of an oak tree with the distinctive smaller dwarf chinquapin leaves, but growing much larger than a dwarf.  Oak species readily hybridize within their “group”, and this may have been a hybridized version of the chinquapins. 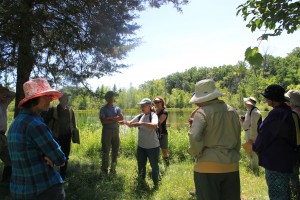 I learned quickly that you don’t get very far down the trail with a group of botanists along, but with a hand lens available there is much to learn!

Bev is working on filling in the gaps in the botanical inventory for the Reichert Preserve and periodically reports back on more notable plants on the preserve…Euphorbia corollata (flowering spurge), Antennaria plantaginifolia  (pussy toes) and Helianthus occidentalis (western sunflower) moving in to the old golf course, and Corallorhiza maculata (spotted coral root) in the woods were the most recent reports.

The Reichert Preserve is open by permission only and will be closed for the general public until the parking lot is constructed. If you would like to join a group for a tour, there is another scheduled for September 14th. Additionally, Legacy is always looking for volunteers to help with inventories and to help control invasive species! Give us a call if you are interested! (734)302-5263