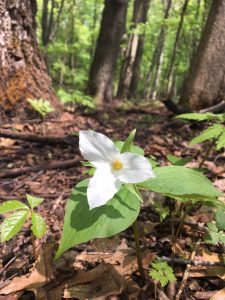 Trillium sprouting after the Sharon Hills burn in May. Photo by Edie Juno

Following recent prescribed burns at the Lloyd and Mabel Johnson and Sharon Hills Nature Preserves, Legacy staff are frequently asked “what happens next?” Nature doesn’t wait months or require full regeneration to begin using the area just burned. First to investigate the burns are many of our feathered friends, including American robins, crows, blackbirds, killdeer, owls, and hawks.

Even the sandhill crane likes to poke around looking for a treasured morsel to eat. Some local avian species—such as tree swallows and eastern bluebirds—never leave the area during a burn. They just fly around until the fire has passed and return to their nest boxes to resume their busy lives.

Turtles and other terrestrials venture out of the nearby wetlands to lay their eggs on the newly cleared terrain. Snakes take advantage of the decreased threat of airborne predators, slithering to the burned area to sun themselves in peace.

Many animals that were living in the brush survive the burns because the fire is hottest a few feet above the ground and coolest at ground level.

Finally, tender shoots of the native grasses and forbs begin reaching through the blackened earth toward the sky. It’s surprising how quickly Mother Nature heals itself and how soon the burned area returns to a fully functioning grassland. If you wonder if burns are really necessary, remember that flora and fauna evolve with fire.

There are no upcoming events at this time.