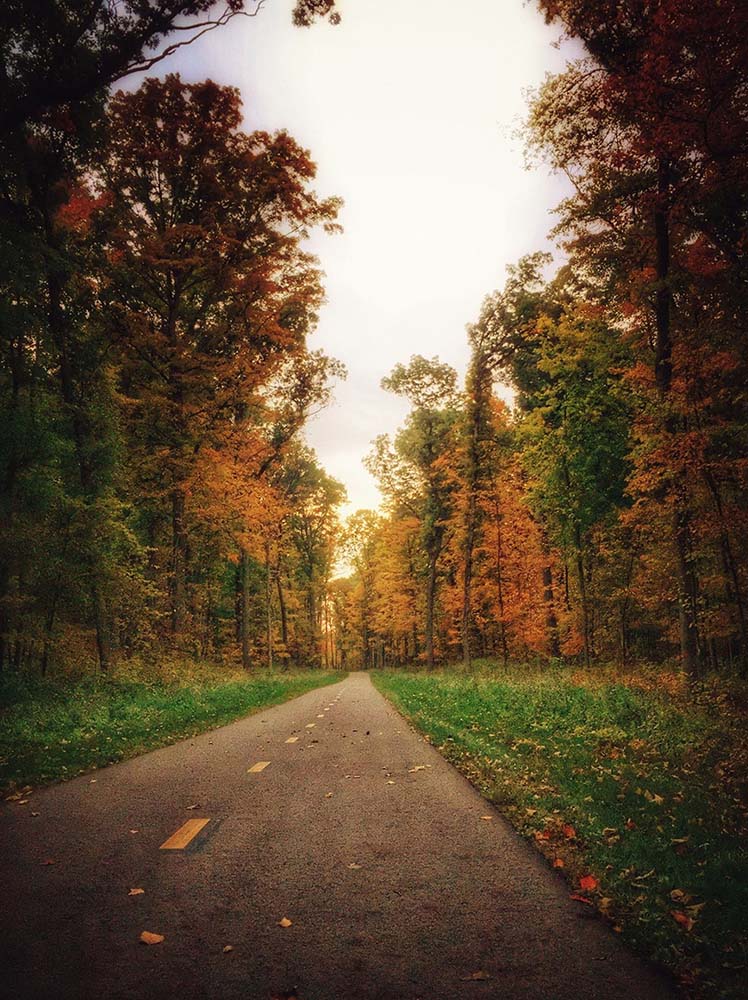 The Border-to-Border Trail between Dexter and the Hudson Mills Metropark. Photo by Paul Wiklanski.

Other than permanent land protection, what’s the value of having a strong land conservancy in your community? As a 45-year-old organization with deep local roots and a professional staff, Legacy has helped volunteer-led groups working on related issues to establish and fast-track significant new land-use initiatives. We played that role for two groups recently:

We applaud the good work of these two new groups and the many individuals and organizations who have stepped up to support their efforts. Learn more about them below.

As you’ll see, YOUR ongoing support for Legacy benefits the whole community. You enable us to carry out our focused mission—preserving land—while achieving related goals by helping committed neighbors make great strides on compatible projects. Thank you!

Building pathways to enjoy the land and water

Huron Waterloo Pathways Initiative (HWPI) was inspired by the multi-use path from Dexter to Hudson Mills Metropark, the location of this photo. HWPI board members (front, from left) Jeff Hardcastle, Linda Mahan, and Rob Mahan enjoy a ride with family members Lucas and Emily Kizer (back).

After a wonderful trail connecting Dexter to the Hudson Mills Metro Park opened, I was among a small group of Dexter and Chelsea residents who gathered to talk about building a trail connecting our towns. The recreational pathway along the Huron River was so exciting that we were motivated to expand it!

Since that meeting in November 2014, we’ve formed a volunteer-run organization—Huron Waterloo Pathways Initiative (HWPI)—to support development of a regional trail network. We realized early that connectivity is key. Most of the funding for trails originates at the state level, and the state’s priority is to link existing recreational resources. 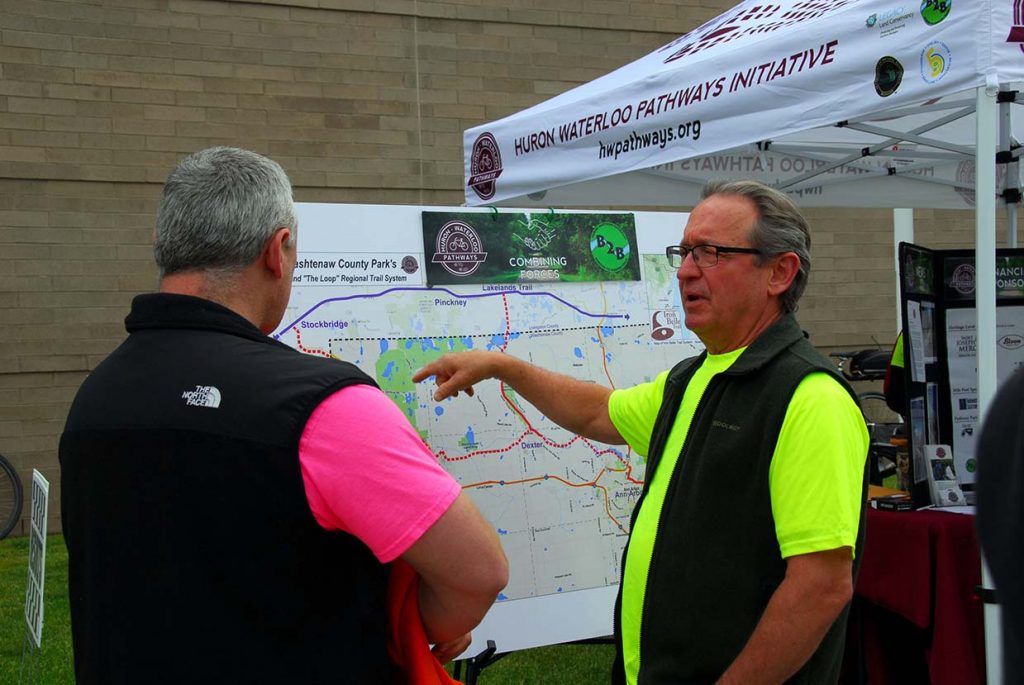 HWPI board member Greg Peter describes the planned regional trail system to a booth visitor at an event in Chelsea. Photo by Rob Mahan.

Connecting trails is closely related to Legacy Land Conservancy’s Emerald Arc work to connect protected lands. So we were delighted when Legacy’s executive director at the time, Susan Lackey, suggested we work together. Legacy is celebrating its 45th anniversary this year, so they clearly have significant expertise to offer a new organization like ours. Legacy stepped up to help manage our donations and finances. That paved the way for our volunteers to focus on awareness-building, fundraising, and coordinating trail-related efforts.

The regional plan that has developed over the past year is known as “The Loop” (see map at huron-waterloo-pathways.org). It will comprise 44 miles of paved multi-use pathways connecting the communities of Dexter, Chelsea, and Stockbridge, and the Waterloo and Pinckney State Recreation Areas. The new trails will link with the Lakelands and Border-to-Border trails to tie in Ann Arbor, Ypsilanti, and other communities. This trail system will be a major destination within an hour’s drive of more than 3 million Michigan residents! 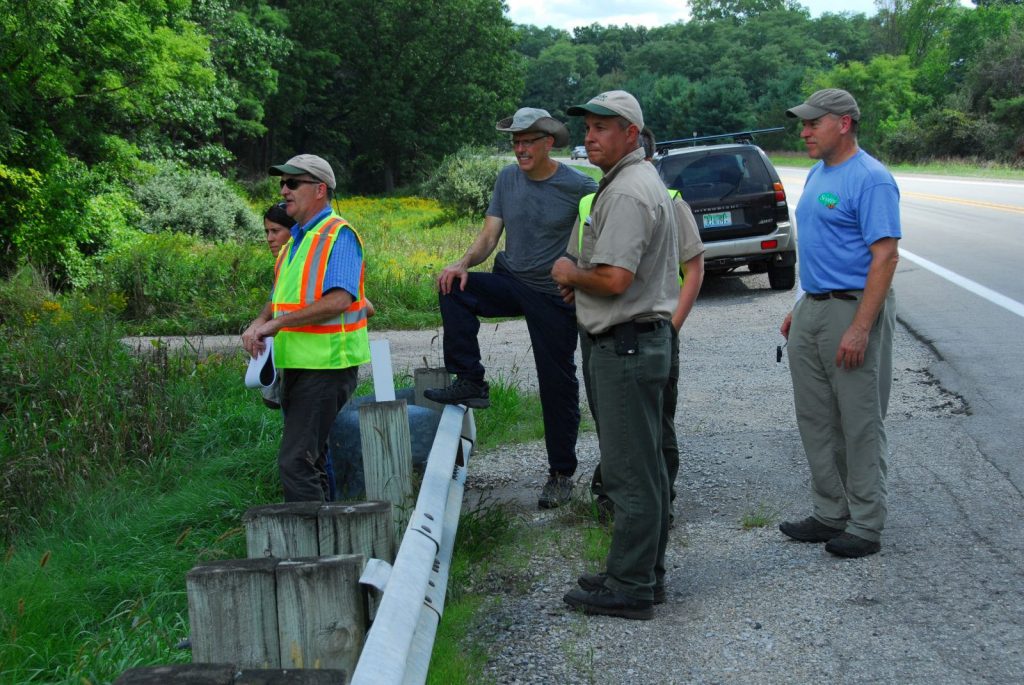 HWPI partners perform a walk-through of the proposed route for Phase 1 of the new recreational pathway in September 2016. Photo by Rob Mahan.

In just over a year HWPI raised more than $500,000 in private donations, secured $1,800,000 in state funding, and completed feasibility studies on more than 15 miles of trail. With a little luck, the first phase of construction will begin during the summer of 2017.

HWPI has been able to move rapidly as result of successful collaboration with like-minded organizations such as Legacy. Land conservation and trails help make our region a wonderful place to live.

By John W. Stanowski
President, Friends of the Saline River

After 12 years of waiting, an ad hoc committee in York Township formed to establish more community recreation areas had to act fast.

In 2014, a beautiful 17-acre property bordering the Saline River—identified as a perfect candidate for parkland—came up for sale. To ensure it would be preserved, the Mayor Pro Tem of Saline, David Rhoads, purchased the land with his own resources, thereby holding it while I, as York Township Supervisor, became involved. Together, the township worked out the details and began planning to buy the land from David. Washtenaw County Parks and Recreation Commission and Legacy Land Conservancy offered financial assistance totaling $52,000, which was a good start, but we needed to raise an additional $60,000.

The new Leslee Niethammer Saline River Preserve (labeled ‘Nature Preserve’) joins four City of Saline parks along and near the Saline River, from Curtiss Park southward. The Friends of the Saline River group plans to connect it to the existing parks. Map courtesy of Jim Peters.

The cities of Saline and Milan joined with York Township in our quest to establish a nature preserve on the property. The partners envision a trail into the new preserve leading from Curtiss Park south through Salt Springs Park. We formed the “Friends of the Saline River” to carry out our ambitious plan and manage the preserve.

While waiting for our application as a nonprofit organization to be approved, we needed to begin raising money. As a long-established regional nonprofit, Legacy offered to collect tax-deductible contributions on behalf of the Friends to keep the momentum going with a community-wide fundraising campaign. Thanks to the many individuals and organizations who donated, on July 27, 2016, the Friends purchased the property!

The new Leslee Niethammer Saline River Preserve is named in memory of David Rhoads’ wife, long-time Director of the Saline District Library. “I wanted to recognize her for all the great things she did for the community,” David said.

We are pleased to have harnessed wide community support for permanently protecting this nature preserve. Next up: trails, hand rails to assist in walking down to the valley floor, a bridge to connect to the Saline parks, and eventually a navigable route for paddlers between Saline and Milan. Find us on Facebook.