Guest Post by Will Hathaway, son of Mary Hathaway 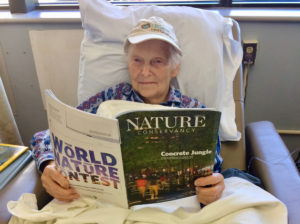 My mother, Mary Hathaway, who passed away on October 6th, had a strong commitment to preserving nature for future generations. Her husband, (my father) John Hathaway, was part of a team of volunteers who put together the first land trust to save what is now the Osborne Mill Preserve on the Huron River. Together, Mary and John acquired a wooded lot just outside of Ann Arbor with the express purpose of protecting it. In a 2012 interview, Mary remembered how she and John first went to look at the woods one day in May, they both “fell in love with the woods, at that time carpeted with trillium, and it was gorgeous.” She said that they looked at each other and agreed, “If we don’t protect this, it’ll be ruined.”

Mary and John became stewards of the woods in the early 1970s and since then held an annual springtime gathering to celebrate the arrival of the wildflowers. The trillium parties were an opportunity to share the woods with family and friends when the wildflowers were at their peak. They kept this tradition going even after John suffered a stroke in 1991. Mary continued hosting trillium parties after John passed away in 2001.

About that time, Mary noticed that several invasive species, such as garlic mustard, were encroaching and crowding out the native wildflowers. Thus began a redoubled effort to protect the woods. Every spring, Mary organized family and friends to pull weeds. She engaged a local contractor to help remove overgrowths of buckthorn and honeysuckle and then conduct a series of controlled burns. The woods responded by generating more and more wildflowers. In 2018 a new invasive species, stiltgrass, was identified. Undaunted, Mary and her family have worked to remove this new threat to the woods.

A few years after John’s death, Mary worked with Legacy Land Conservancy to place a conservation easement on 5.37 acres of woods, the area with the most beautiful wildflowers. The site is adjacent to the Botsford Nature Preserve. The protected parcels ensure that an oasis of over 30 acres of undisturbed woods will endure.

Mary’s ability to get out in the woods was diminished as her health declined. But, even during her months of chemotherapy, Mary maintained her interest in nurturing a green environment for future generations.

Editor’s Note: Mary Hathaway was an ardent supporter of Legacy Land Conservancy’s work for decades and will be remembered by us as a dear friend and advocate for natural spaces. Her generosity will continue into the future as she has requested that gifts to remember her be made to four local nonprofits, including Legacy Land Conservancy. To make a gift in memory of Mary click here.

To learn more about Mary’s life read a recent feature article in the Ann Arbor news and her obituary.